So I should start this review by saying that I have been to Niagara Falls 3 times prior to this visit. I have already reviewed the Niagara Falls area before and you can read it here. However I have only been by my self and never taken family with me. So for this trip my experience seemed to be 100% different because we went to see different things AND I DID NOT TAKE THE MOTORCYCLE WITH ME. 🙁

So I should start by saying this was my mothers idea. My trip this summer with my daughter was suppose to be New York. But I decided to change my mind because Mom asked to go on a trip with me. She has not left the Dallas, Tx area in 5 years and has not left Texas in decades. So I jumped on the opportunity to take her somewhere. We talked about locations and she choose the Falls because she has never seen them. We planned to stay in the Canada side because both of the falls (The American and Horseshoe) both kinda face Canada. For that reason it was a good choice. For other reasons Canada was a horrible choice. Ill get to that later. 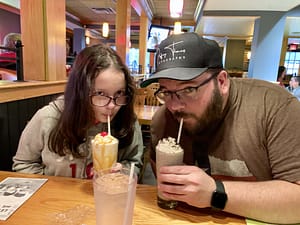 Mom flew in to Cincinnati Wednesday afternoon. We stayed one night at my place then we headed north. Our drive on Thursday was fairly uneventful. We arrived at the border by 5pm or so. It was a quick trip for me, but long for my mom and my Daughter, Evie. I am used to road trips. They were dying.

We arrived to Niagara Falls in short order (from my point of view) then after a short line were in Canada.  We went straight to the hotel to get settled in.  The hotel I choose was “falls view”.  Now you are probably thinking that we would have a view of the falls… Nope.  Just a small view of the top of the Canadian Falls.  Great….

The night was uneventful.

We got up and got Breakfast and headed for the falls!  My mother and daughter loved seeing the sites and was very impressed my the views!  I went straight for the maid of the mist se we can get on a boat to see the falls up close… BUT THEY WERE CLOSED due to high water!  “Maybe they will be open later.” was the answer I got from the workers at the booth.  Ok, so we had lunch by the water, took lots of pictures and went back to the hotel to rest for a few hours.

Mom went to the rest room and fell HARD.  She had a cut on her head from her left eyebrow to ¾ to the back of her head.  Maybe 7 inches long!  There was blood everywhere…. everywhere.  I had Evie call the emergency number and I tried to stop the bleeding.  By the time the ambulance got there my hands was soaked with her blood.  I was freaking out.  When she was taken away in the ambulance that was the last time I saw her for about 4 hours!!

Waiting in the emergency waiting room was killer.  No updates, or info from any of the staff for hours.  Then I was able to see her.  She was ½ stitched up but still bleeding.  They stoped sewing her up ½ and left it open for hours.  The condition of the emergency room was dirty, damp, and smelled of mold.  There was dried blood on the drawers and floor.  Stains all over the floor and equipment.  It was very strange to see an emergency room that dirty.

She stayed the for another 7 course before getting the rest of the gash stitched.  She was also required to stay there overnight.  Evie and I left there around 11pm to for the hotel.

Evie and I got up early and fed ourselves before making it back to the hospital. Mom was in good shape as they had her on pain pills.  She was going to be discharged but would not let her take a perception for pain meds with her.  We talked to the nurse to let her take one last pill before leaving.  Now she had about 6-ish hours of pain free window.

Now is the time to high-tail it back to Cincinnati!  It was an 8 hour drive but I was betting I could beat that.  We ran back to the hotel, packed up and took off.  The line to get back into America was short and fast.  When we hit a highway again, we sped at least 10 MPH over the speed limit for the rest of the trip and got home in 7 hours!  I unpacked as fast as I could and had Evie’s grandmother pick up her from my house so I could take mom to the hospital.

This hospital was clean and smelled nice.  They saw her within 30 minutes and got her more pain meds (with a perception) and was discharged in less than 2 hours.  Back home around 10pm to sleep.

We spent all of that at home recovering and watching TV.  I has been a long weekend.  I caught up on work and helped mom feel better.  It was uneventful.

Mom really felt better by this point and it was a good thing too.  She needed to fly home.  Evie and I dropped her off at the airport and she was off!

Over the coming days and weeks mom has healed and is ready for another trip!  We are thinking about going to Florida to see a rocket launch!!  So Exciting!!